Aand welcome back to this convention's scientific portion. Now that we've established the timeline for the Fifth Age, we may begin to examine one of the more mysterious items found among Tolkien's belongings. The following speaker is of the 'Hobbits are the Best'-sect, so he may have some astonishing stories for us.

Hrmm... thank you for your rather biased introduction. As you, and most of you here present, know, we do not call ourselves by that name. Most of you have been brought up in an environment where it's virtually impossible to not know our views on recent history, which are almost the same as you have. In fact, we differ mainly on the interpretation of the 'Book of Westmarch' which you consider to be an authentic account of things long gone. I'll admit it's a real thing, and very old, but to believe it's been unchanging for over 5000 years? Well, there aren't too many miracles or works of Eru, Valar or Maiar recently, as you call them, so we might as well assume so. This is a scientific presentation so let's leave the strict adherence to various scripts of Old and look only at the evidence of the modern times.

First, I'll need to thank the people at the Tolkien Society of Drann, preserving the inheritance of the translator, of the opportunity, to look and study some of the less holy objects he left us. This presentation would not have been possible without their assistance.

As you know, JRR Tolkien, whom you call the Redeemer of Faith, left a huge repository of writings, drawings, maps, linguistic studies of the languages long gone and explanations of the true and proper religious practices here on Middle Earth for us to wonder and examine. Less certain is the knowledge about the figurines, miniature sceneries and buildings, records of entish speech, and even a couple of re-enactments of the mighty battle scenes of Third Age filmed on black and white 8 mm and replicas of Anduril and Glamdring he made during his time in New Zealand. We are told the replicas of these are faithful reproductions of the originals. I'm not here to question these, but rather trying to explain why a certain item of his might be more important than we have assumed.

This presentation assumes the view of, what the the introducer ironically called the  'Hobbits are the Best'-church about Tolkien being a spirited writer and a scholar speaking of Eru through his writings. The themes presented in his legacy are much the same we consider to be relevant to the communion of faiths. The sheer amount of work he did to promote the knowledge of Eru in this world of heathenism could be considered a miracle in itself. There are, however, items that seemingly do not connect to the Great Story of the Middle Earth. I was presented to these, and allowed to further examine some of these, and among these there was a city map made in modern style, with no info of where it was from. It though had some inscriptions in a curious style of Quenya, it looked like.

Me, somewhat versed in Old English, Norse, and Gothic pretty soon noticed these tongues Tolkien normally used in his more esoteric notes regarding the Ages of the Trees couldn't be applied here. Parts of the markings on the map were written in almost unintelligible Sarati. This was though an indication that the map was from the period when Tolkien started working on elven languages, gnomish, sindarin and quenya, that is 1926-1928.

The fact that the map was not in Adunaic, as the highly respected scholar Ar-Thurdenthil (pseudonym meaning the 22 halo of the moon) told me, directed my attention to Uralic languages, the largest of which are Hungarian and Finnish. An often repeated claim is, Tolkien based elven tongues on these agglutinating languages, but in reality many features of the elvish languages are similar to continental Celtic languages of Roman times, possibly the best comparisons to date are to Lepontic and Rhaetian languages.  This would be a natural progression from the speeches used during Aragorns' time. And this fits neatly to the translation style of Tolkien using ever older languages to ever older cultures in the book. Additionally, Tolkien never visited these countries, so why would there be a map of a Finnish or Hungarian city in the middle earth corpus?

But the languages presented in the map, turned out to be de-vowelized Finnish or some of the early forms of sindarin. At the time of the making the map, this must have been 1927 or 1928, Tolkien almost never used tehtas and was frequently experimenting with various ways of interpreting the Book of Westmarch, along with the writing system and constructing maps according to the badly damaged original and the text. It's remarkable how the names on the map are already at this time almost in the correct positions. He must have used a system of rectangular coordinates  present in some early copies of the Book. The only difference here is that the coordinate system is mirrored!

The remarkable fearture of mirroring the directions may have the explanation that long stretches of the book happen during the nights.  Let me explain. According to my theory, Tolkien, in his early days, was not sure of the historicity of the Book! ... ... Please calm down ... ... ... My theory states that in the 1920s and early 30s Tolkien had only photocopies of the book at his disposal, and we all know how bad these can be. If he had the original, it's not likely he would have made the mistake of confusing the Westron 'west' and 'east' and 'day' and 'night'. This would have turned the orientation of the map like it was.

After he got the Original Book in his possession right before WWII, he of course noticed his error and noticed how it clearly depicts European coastlines before the intervention of Eru. No Wegener needed! So my theory claims that in his early days, JRR was not infallible, and attempted to explain the book as a medieval fiction from the city of Turku, southwest Finland, all with elves, dwarfs, pixies as hobbits and Gandalf as Santa Claus. The Middle-Earth humans would be Finns and the Numenoreans Swedes, who had just come to the shores of Finland in 1400s. This part of the theory needs further study, though. I'm hoping I'll get to study the appendixes of the original or at least a good copy later on.

During the process of deciphering this early depiction of the western parts of Middle-Earth I had to learn 3 new languages and travel widely in the former Lamedon territory in northen Italy. The original did not have the markings of the forests, mountains, and most of the rivers, but only the names of the places. I'm here to present the final version of the map in my dissertation to the audience for the first time, this has been approved as 'somewhat speculative' by the White Council of Shirewood. I've added the mountain chains, most of the rivers, and the coastline. Several locations had to be moved from the more accurate locations in the modern maps, notably Erebor is about 50 km east of the true one. Other changes are present also. Copies of this map are available at request in the given url, so students and researchers may observe the remarkable coincidences with Turku and Middle-Earth topography and locations. Finally, I hope the map will be of assistance in deciphering the other early writings of the Redeemer. Thank You. 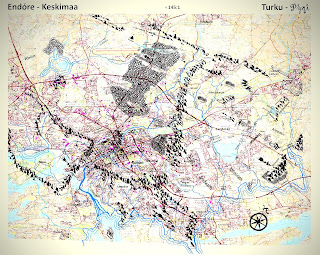