We took two buckyballs and sat on them, on a pentagonal side. One was slightly smaller than the other. Then we inserted it inside the other one and turned it by 36 degrees as it is clear that the corners of the smaller pentagon must be as near as possible of the larger one to minimize the effect of cartographic distortion present in the projection. The difficulties in transforming directions described in the normal N-S notation of the cardinal directions to the model were averted also by this method, since the opposite distortions cancel each other out by by a fixed amount derivable by simple mathematics. The fact that one of the buckyballs gets overtly represented by the distortion is also fixable by the relative sizes of their flat surfaces. To apply atmospheric and fluid dynamics equations on a flat surface is much easier than doing it in a true (curved) environment, in fact many of them have been derived for this kind of case, but this lack of accuracy in the model can be side-stepped by applying the true values of volume (from the elliptical equations) on the grids in the polyhedra. Additionally, the application of flat surface in the model creates a problem in the radiation calculations as a sphere is a sphere and f.e. a He atom in the atmosphere is a sphere, so assuming the direction of the radiation from this atom is random (as it is by entropic principles) the radiation from such atom will be balanced outwards of the center of the gravity. Then we tested the two polyhedra by giving them the observed physical information from one early year (adjusted for their location in the buckyball projection). Then there was a lot of adjusting the parameters, inserting the error limits of various data points, type of thing done and after we got reproducible results (from the average of the two oppositely tilted models) that fitted the later observed data reasonably well, it was time to do the first prediction to the future. Further refinements to the model were done afterwards, as more data points from deep ocean and upper troposphere had been inroduced. Any possible similarities in this story to real persons or events are purely coincidental. 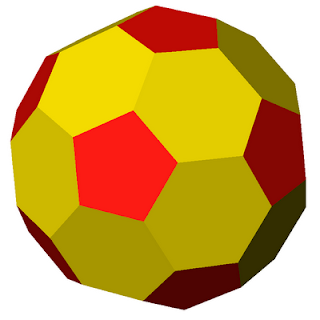