Still trying to wake up a ten year old laptop, possibly having motherboard issues (and with DVD and maybe even with Graphics card, but these might all be related to one corruption in the chipset, maybe?)
Some humor inserted, many of the 'star names' might be in wrong places and might have totally forgotten about some. Distrowatch says I forgot about (2021.08.21) Endeavour, Solus, KDE neon, antiX, Puppy and Kali, but it's possible there are some more. (Addition:FreeBSD should probably be somewhere right of the constellation β Gru?, as it tries to do much in direct binary, like unix, Linux is more lenient in the use of programming languages i guess.) Various free operating systems have stable and rolling releases, that is, those that are tested more and updated not too frequently, and those that are receiving updates frequently, but on occasion might cause issues. Once a rolling release is rolled far enough away from the release it started people might give it a separate name, so there are probably other popular releases about if you read this far im the future.
Anyway, the look and feel of a Free OS depends much on the Desktop Environment it's using.  Some distributions allow systemic changes only through the Command Prompt, while this is a good precautionary method to prevent the user to do harm to important System Files, many commercial OSes have much prevented the user to touch these files almost wholly (if the user is not a professional). At least the few Free OS systems I've checked use the master password user himself has set to allow changes in the System Files. Just remember not to touch files outside your home directory, if you're unsure what you do. Of course if you want to change the system in some way, f.e. to run some programs not within the Free OS point and click system, you have to go there. Some distributions have point and click menus for some settings, but not all mac and windows programs will run their installation programs on Free OS, nor install properly if they do run. Ask the program vendor about a version that could run or use an alternative. Sometimes an older version of a program might run on another OS.
Mind you, the 'constellation' presented is only visible totally from quite southern latitudes. (~20N southwards). The stars belong to several existing constellations Ara, Pavo, Octans, Tucanae, Indus, Telescopium and few additional stars. The Penguin stares ~ South Pole. The moon never goes as near of the South Pole as the penguins eye.
For possible use as a desktop background image (SkymapOnLine image modified by me, assuming artistic licence.) 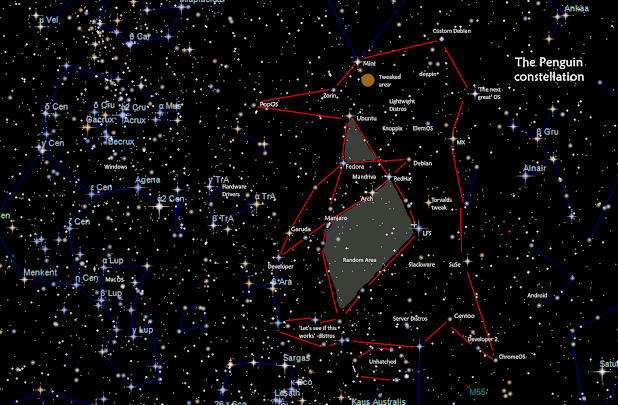 Circular design for organizing the elements. It's a pity we don't have a 16-hour clock, I could have constructed this much neater then. And why abandon the fine Bohr-model all together? Some elements are not of this world, thus they're purplish-violet (and radioactively decay to some other colors)

This system works well with the human usage of words. "Gimme just a second" usually means at least 4 seconds. "This'll take only a moment" would be 2 1/4 minutes. "It'll be ready within an hour" customarily means an hour and a half, doesn't it? Other plus sides, I don't know. At least it summarily works until element 119 is found.

Possibly continuing this project with some hard data additions at some point. And it's somewhat ugly now, but it was hard enough to draw a regular 40-hedron. Sp orbitals are organised spirally so there are two regular hours and a radioactive hour after these. ;-) , there's no other justification to set them up like this that I'd consider helpful. The other way to count the hours would require 40 minutes in half an hour, so the lanthanide/actinide seconds would be near the current second. 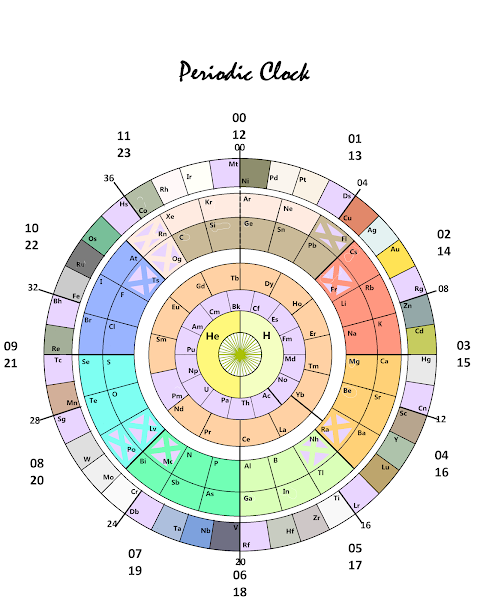 Made a copy with abbreviations on a huge font size. Likely too large and they make the organization of the circlets less clear. :-/.
Blogspot has become harder to use. See it here, finally got it in. 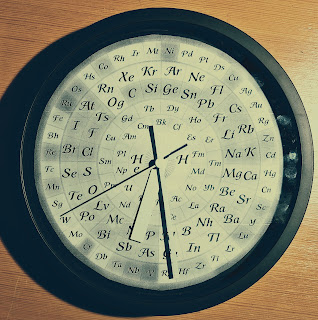 Another maybe more logical arrangement:
This divides a day to eight segments of 3 three hours each. 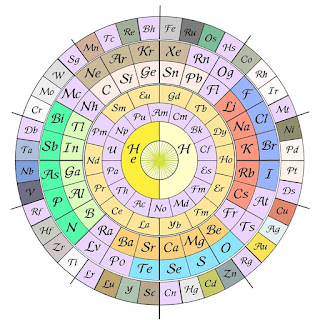 Very rough approximation of the interpretaton over 2,5 years ago. This is not a map of Middle Earth. Nor is it a map of Europe. No explanations given. the 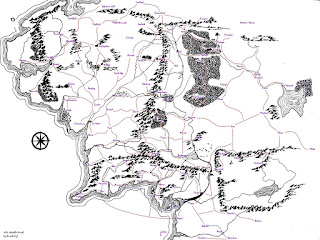 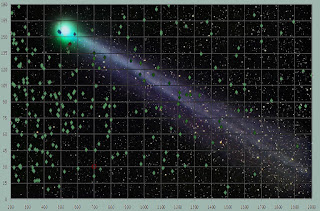 The simplest possible diagram of orbital alignement (degrees) of comets between 200-2000 AU (average), just because en.wikipedia was missing this. There's likely some observational bias here, as I believe the comets are easiest to find near the celestial north pole. It's pretty easy to point a wide-field telescope towards Stella Polaris, and take an overnight shot or several. Comets would show as ripples or lines curving out or in between the regular arcs of normal stars.

(data:wikipaedia/List_of_near-parabolic_comets
image of C/2014 Q2 (flipped) as the background (friibii))
Posted by Oale at 09:46 No comments:

As there's still not a push to convert the metric system to a natural unit system, mind you, because of quite good reasons, it might be best to stick with the SI-unit system. Though this system doesn't base itself to any universal physical constant, it can (by definition) be derived from these. At least it should be. Currently the physicist are guessing that between 19 to 26 constants are present in universe, not accounting the possible constants associated with dark matter and dark energy. Many of these are of no use in normal human interactions. It's also clear that a system based on these would need to be normalized to be usable in human context. F.e., I could say I'm 1,126077784 * 1035 Planck lengths tall, but why not say this with simpler numbers and say I'm c. 6 feet. We might take 1035 Planck Lenghts as our base unit in such a system to get on human scale (this would be ~161,6 cm aka ~5 feet 3⅝ inches).

The metric system might also need refinement, as the base of all metric measures has been changed over time. F.e. metre is no longer a 1/10'000'000th of the quarter of the distance round the globe via poles, but something to do with wave-particle frequencies in a theoretical perfect vacuum (oops, quite not so), making the exact metre accessible to only physicists and their imagination. But it must be agreed that this distance changes also by natural means, heavy earthquakes and such large mass movements shape the earth. These natural phenomena and the measurement errors present in the late 18th century make the current meter ~0,1478% too large for the original definition. Still, many countries use the SI-based system of measurement. This is of course no problem as long as the numbers we get can be converted to natural units. It just wouldn't be prudent to say to an alien, "I'm 1,82 meters". Or maybe it would, but she/he/it wouldn't understand. She/he/it might also decide I'm too Earth-centric to live. Thus we might use multiples or fractions of natural units as a base. I guess this is not a large problem currently, but soon might be.

The headline of this post is of course inspired by the you-know-who, with the exception of changing the noun to the correct one (MUGA instead of MAGA). Many of you have likely already guessed what the post is about. That is, the incompatibility between the historical, anthropogenically derived units of measurement and the almost scientific SI-system. The reason why I say "almost" in this context should be obvious to math and phys students, this is of course the nature of universe in which there are no irrational numbers (as far as we can know it). F.e. we need 62 decimals of π to calculate the circumference of the universe to multiples of Planck lengths. Planck length is about the shortest accepted length within the framework of quantum physics (without considering black holes) so this number of decimals should be the only ones needed. Still, mathematicians can live on their imaginary Euclidian Plane and calculate it much further. π to 62 decimals is 3.14159265358979323846264338327950288419716939937510582097494459 and the physicists won't need to blow up their computers' math processors. There are a whole bunch of these numbers not existing in the universe, as any mathematician may tell you. Heck, there is even a number j for which j2=1, but j≠1! The things people dream up.

The whole shebang above of course means that ∞ and 0 would exist only in our imagination, or at least be even harder to define than now. Alternately, we could define "universe = 1", and all the numbers we use would be fractions of this, but this is veering to ontological questions and the foundations of mathematics, so I better leave it alone. F.e. the situation where you have 0$ wouldn't exist, but instead the bank might say you have ε$ on your account (1st definition). As there are no coins of this size, the real life effect would be the same.

To cut to the chase, to MUGA, you the people of USA, could convert the aged measurement units you use to the SI-based system with the following conversion factors (suggested names for the units included):

This would instantly make US at least 0,5% greater, and for the bolder of you, who would convert to the 'new' mile of 1500 m, a whole 7.2896% greater. This would mean the mile-run records might be made greaterer and areas would similarly be huge'er by far. Similar adjustments could be made for weights, like, pound is half a kilo, so everyone would feel less fat (c.9%) afterwards. I'm not going to go through all the conversions required to MUGA, but you really should change the gallon to be 3,75 liters so you'd get more gallons per buck. Some additional suggestions for conversion factors may appear on the page later on the blog after I figure out what the odd electric voltage you guys use means for electric bills.

If you feel this is a cheap trick, consider that you use an imperial system, despite having a two-party democracy and a president (of sorts).

(Hopefully I got the calculations correct)

Mod of one proposal for the Flag of Earth. 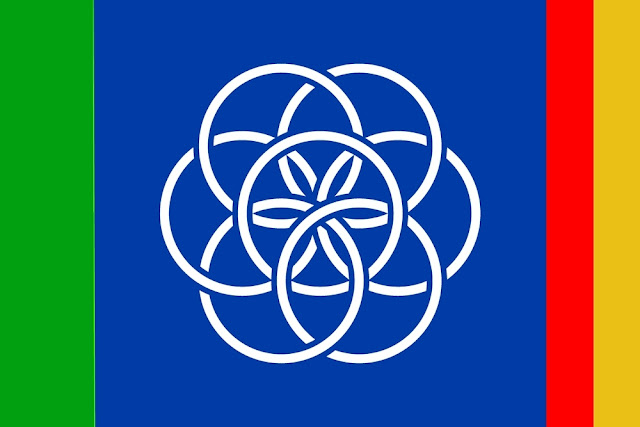 Afro-Eurasia, Gondwana (alias Australia-Antarctica), and America, the Seven Seas in blue.
Posted by Oale at 08:57 No comments: