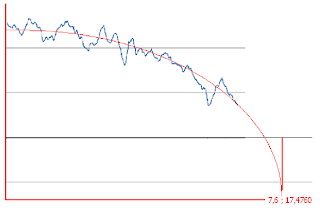 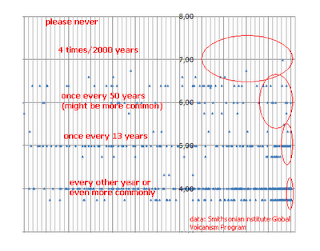 Hurricane Irene remnant low pressure that passed here the 13-14th Sept. I've seen worse weather when in the army and couple times afterwards also. the island south of this got it somewhat worse, with some 2000 residencies losing power. Surge of 0,5 meters was the main effect, few felled small branches on the road. 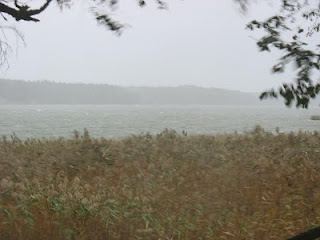 There's no rain here, all of that is sea spray. 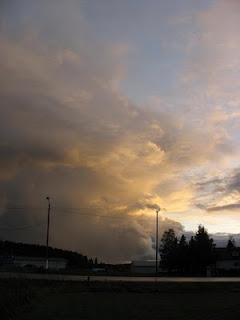 Labels: nothing much to see

likely going offline for a while.
Posted by Oale at 11:36 No comments:

Presume the climate system of the earth is a heat engine and draw a simple image of how the heat engine distributes the energy between the components of the engine including internal variation, some effects of it and human influence on it using at maximum 1200*854 pixels: 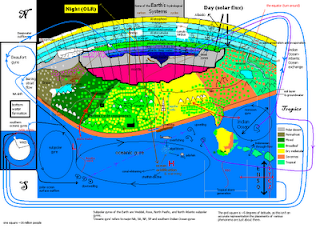 Task not complete since the map doesn't include the real topography of the earth, the directions on many lines and there is a serious lack of explanations on many processes. I guess this takes a bit more pixels.
Posted by Oale at 08:49 2 comments:

Daniel Bailey is a moderator at SkepticalScience and he has written a story which would have to be adapted in the cold Nordic conditions if I had written something similar to it. The story ends when the italics end, so if you're after stories end your reading there :-). 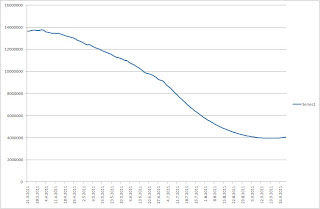 A japanese gardener of noble descent (that is, a samurai gardener, a rarity back in the late 19th century) sweated in the summer heat as the little ice age has ended in his garden. Even the recent war had gone badly for his clan (a possible reason for him to start gardening), so he felt extra heated for the climate change. The only war memento he had obtained was a historical book of european origin, complete with images of the knightly life during the medieaval warm period (the ending of which, had been explained to him, was a main reason for the continued european search for nice, not too warm, not too cold, pastures around the world). One image showed a knight sitting in the shade of a vine pergola, with a caption saying "After the loss at Agincourt the surviving knights retreated to their own lands". The samurai in question was abnormally interested in the foreign ways of life due to his great-great-great auntie having married to a portuguese civilized captain, and thought the image was very soothing. So, because the clan leader had banned all the foreign food (and plant) imports, the samurai decided to begin to solve the problem of not having proper climbing vines by using native plants that could cover the pergola his carpenter had made to his specifications. The first attempts failed miserably, but after reading the "Great paper of the Monk, "Experiments on Plant Hybridization","left by a spanish priest at the library of the province capital for 'he had other interests', he started to slice various peas in half and recombining these to 'new sorts of peas' and seeing if he could grow a proper vine. Needless to say, he succeeded and thus a new species of Pueraria-complex was born, later to be known as samurai-weed (Salishan language:Kudzu) in the American Northwest.
Posted by Oale at 11:29 1 comment:

Actually PETM was caused by the remnants of a motorized dinosaur civilization who were so bigoted they didn't even look to the skies to find out if there was trouble ahead... the rest of them died on diseases transmitted by bat bites to their ears which caused their noses to whiten and their bones to rot.
Posted by Oale at 09:25 1 comment:

years are not brothers 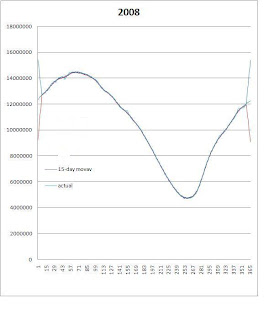 Finland is a cold country. Well, not quite as cold as continental Canada or Siberia but quite cold anyway. This winter, the temperatures have been below normal and snow entered the country early, in November, like it just wanted to remind people of the winters in 1940s or the latest cold winter of 1986-7.

Hence there are adult finnish people who have not seen winters like this one.

Finnish is a somewhat synthetic language and it allows the use of compound nouns, so it is not surprising that finnish and its dialects have quite a lot of words describing the solid forms of H20. In fact these are way more than for the liquid and gaseous H2O. Some of these are commonly used also in weather forecasts so some clarification may be needed.

Big hat tip for http://lumensanakirja.blogspot.com/2011/, for reminding of the various words I've not used since 1980s.

Actually using these is pretty intuitive since many of these relate to weather attributes or skiing conditions. I've tried to formalize some of these in the following easy 14 categories (still very much unfinished and possibly somewhat inaccurate and in need of a revision), as I'm from the southwest, this dialect is overtly represented...:

general word for snow: lumi
1. progression of snow on ground during winter: ensilumi (first snow) -> siite (little snow = under 2-4 cm) -> lunta maassa (snow on ground, but not quite enough for good skiing = under 10 cm) -> kunnon talvi (winter proper, enough snow/ice for wintry activities) -> hanki (when the general snow depth is highest (feb-early march) -> temperature above 0 -> suoja -> below 0 -> suhju or hölsä (or a free swear word)(depending on the lenght the suoja weather...) -> above zero -> sohjo -> loska (generally at least 5 cm))

hop over any of the middle ones if the winter isn't long or good enough...

4. jää - ice (increasing brittleness): teräsjää > porejää (ice that maybe walked on with caution), kohvajää (partly formed from snow, hence foolhardy to cross though may succeed, walked on only if forced to) > puikkojää (very brittle, even experienced ice fishers may drown on this one > tikkujää(if one gets on this, going through it into water is certain)

I see this takes quite a long time, so the following categories have only samples.

5. the types of singular graupel/hail/sleet/snowflakes
there are about 11 of these... depending on the temperature in which they fall/the appearance/size

6. snow/ice not on the ground:
f.e. tykky: large chunks of snow, esp. when frozen onto trees, maybe divided to snow tykky and frost tykky
a couple more words for snow/ice on man-made structures

7.ice not on the surface of water:
iljanne: a thin layer of snow atop ice
paanne: multi-layered ice (typically waves crash on top and freeze)
huurre: rime; granular frost (the white stuff in your freezer) also the stuff that comes from breathing at under -5
härmä: frost
kaljama: a thick layer of ice on the ground, lethal in the spring
kuura: hoarfrost; frozen dew
routa: ice in the ground

9. some work related words:
avanto: a hole in ice leading to the water beneath
jotos: reindeer tracks in snow
rannio: a reindeer path in deep snow
judake: reindeer track in snow (Lapland)
kieppi: shallow snowcave for overnighting out

10. skiing related words:
keli: weather conditions on the ground level (not winter specific)
latu: a ski trail in snow
and about 7 more

12.winter and human health
13.transportation (other than skiing) in winter
14.parts of the seasons (late autumn-early spring)

one peculiarity must yet be mentioned: the ordinary dry snow falling at temperatures between -5 and -13 degrees centigrade has had a different word in almost all significant dialects, I guess this is just to keep people talking...

(Disclaimer: One category of winter related words is lacking in finnish for the geography, that is 'the specific glacier words' as Finland has no glaciers to note.)
Posted by Oale at 10:34 1 comment:

after the finnish civil war there were voting locales which had two teams counting the votes since the mistrust.
Posted by Oale at 08:46 No comments:

Had an idea of a text about gene technologists who would have been in the position of wizards in futuristic medieval society, BUT Paul McAuley's 'the Quiet War' has 'em already. Hmmph. Gotta read the book though, I guess.
Posted by Oale at 18:12 No comments:

*Hey, what have you done with this?
-Let's see, what is it?
*It just came from up there, then I processed it and this is what was left.
-Hmmph, doesn't look like anything.
*Yeah, it's kind of icky.
-You know, those up there could possibly do something about that, they've got this process called 'using free radicals'.
*Hey, I'm not going in there, there's poison in there.
-Don't you have contacts with any transporters?
*No, they don't usually come this down.
-I can't take that with me, too yucky.
*Then what do I do with it?
-Bin it.
*Ok, but our bin is a bit full and there's not been enough time for the waste managent processes to take place again.

Then a quake happened and the methanogen was happy.
Posted by Oale at 12:16 3 comments:

Of course what really happened is yet to be determined.
Posted by Oale at 12:17 No comments:

Fiction:
"Now, as Homo s. fossilicus has scored a great Pyrrhic victory over us, and condemned our both subspecies to deteriorating conditions, it's time to examine how this happened and why many of us were also seduced by their propaganda. Also it is time to find out what were the good parts of their culture, and the things possibly applicable to the future culture that will, by the force of nature, incorporate the remaining individuals in our collective Homo subspecies after we have figured out how to live in the projected severely damaged world."
Posted by Oale at 07:44 No comments: