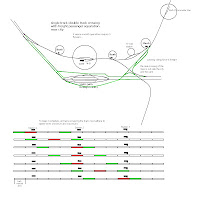 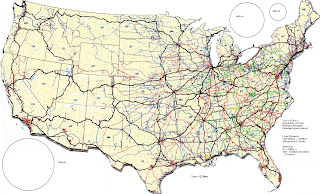 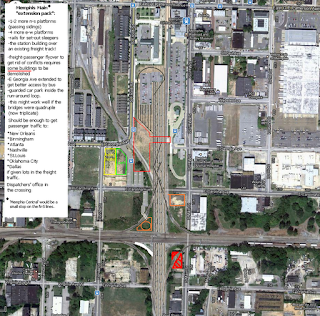 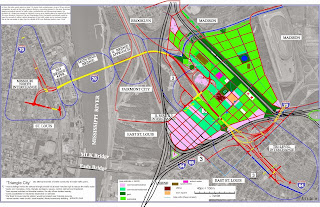 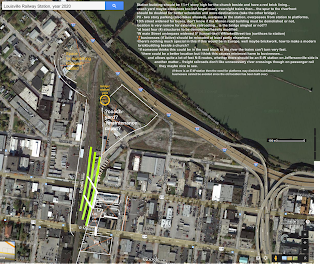 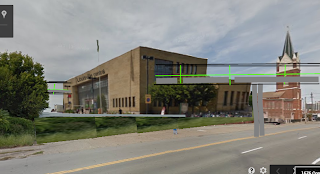 yes, there are errors on the us railroad map and the late addition is also a bit flimsy, there are two big cities along Mississippi, Memphis and St.Louis, where the 110mph express intercity passenger traffic could cross the river. i might have selected the wrong one. Anyway, the river is quite in the center of the US and in boarding a train in either of them, after twelve hours one might find himself anywhere east of the rockies. so, board a train at 7pm, get sleep, refresh yourself at the destination and find yourself looking either the Rockies at Denver or Manhattan in NY.

along central mississippi, of course...

It's not an easy task to fit all of these, even in a large system.

immediately after posting the new image noticed an error, others are likely present...

Minneapolis-Winnipeg goes best via Fargo, and Thunder Bay - Minneapolis would on the shore of Superior.

The additional track is (at least according to BingMaps is between Dayton and Indianapolis. The southern gap between Knoxville and Nashville is a +20mi. gap on mountainous area where it's difficult build a fast track, but maybe a scenic slow route.

West coast:
33.Los Angeles - Las Vegas (-Salt Lake City) (Temptation Express)
34,35,36,37.I think that is pretty much how they operate now and have plans to expand so no comment.

Then there are about 12 more, I guess.
So 64 - 67 routes to connect major cities (and appropriate stations on the way). This would likely double the Amtrak fleet so there might be room for privately owned passenger traffic.

that would be approximately 36000 miles of track (25% of total railway lines in the US.)

Having fun trying to make a database spreadsheet of the routes. This process has uncovered some flaws in the mapp (and some even in the routes). I've been adding some local routes, and cutting some in two sections. The number of routes is now 83 (all abroad florida and some planned commuter lines are included now). The largest urban area without rail service are Winston-Salem, NC for it's location in a hill area,
and Fayetteville--Springdale--Rogers, AR—MO, for it's located far from more important routes. Then there are plenty smaller cities I've not checked yet, and some larger in CA (I guess the local commuter Metrolink connects most of them).

The St.Louis station area looks like being such a mess with the Interstate#64 going right over it, that a potential large renovation for the area is a job for distinguished architects. If one plans to get some area for sleeper cars too, it'd be one heck of a difficult build.

large multimodal station for Louisville area would require some more planning or at least moving out the truck depot opposite the imaged railway station.